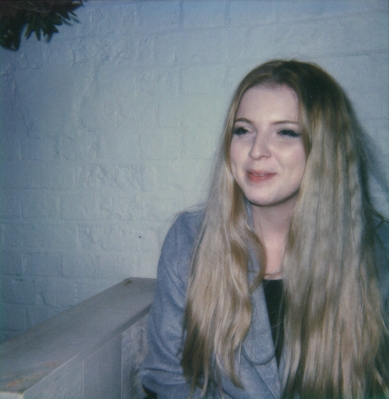 We met up with Rosie Blacher for a quiet drink in the idyllic courtyard of The Kings Head in Aylesbury, Buckinghamshire. We discussed her life, music and art…

Hey Rosie! How are you?

What was your introduction to music? And was it a quick transition from enjoying it to learning to play yourself?

We used to have an upright piano in our house when I was really little, and I remember recording songs onto tape using one of those old karaoke machines when I was 6 or 7. I used to get sent CDs from one of my mums friends up north who worked in a library, loads of random stuff from harp players to R&B compilations. So that was fun and I had loads of music lessons, like I tried violin, saxophone, recorder lessons (classic), piano lessons, but I never practiced and I hated going to them so when I asked for guitar lessons my mum was like no I’ll buy you a guitar from a charity shop and rent a ‘Guitar for Dummies’ video from the library and you can learn yourself! (laughs)

Are you happy with how the A side, Anhedonia, has been received? What can we expect from the B side?

Yeah I think people are enjoying it, it’s pretty floaty and easy to listen to so I’ve been told. I was trying to create something a bit more down to earth (less floaty) for the B-side, but the problem is when I’ve been working on a song for a while I just completely lose sight of what it sounds like and so I think you’ll just have decide what the vibe is yourself.

Did you have any particular inspirations during the writing and recording of these songs?

As dark as it is to say, it’s usually when I’m feeling really low that I write stuff, and it often circulates around borderline alcoholism and general discontent. But it’s just dramatization, that’s all. (laughs)

Do you feel your art compliments your music, or do you see them as separate entities?

I find that when I draw it makes my music better and when I make music I tend to draw better stuff. But sometimes I don’t feel like making noise I just want to be really really quiet but also still be creative so that’s when I draw.

You have recorded both of these songs at home, is this how you have always worked? Have you been in the studio before or worked with other people, either creatively or technically?

I’ve recorded with other people at home studios and I recorded others and myself using the studios at my university. All of it’s just messing around for fun though usually and I’ve always preferred working alone as I’m quite fussy and particular and quite impatient to get things done quickly. But I’m learning the limitations of working alone and I’m asking for more input from fellow musicians these days.

Do you see yourself continuing to record at home? Do you see it more as the most logical route, or do you feel it really adds something to the music?

I’m definitely not going to restrict myself to only recording at home but it’s definitely a preference, especially as it’s something I can do in my pajamas with my dogs chilling in the corner and there’s no stress to be anywhere or talk to anyone (laughs). I don’t know if it adds anything to the music but there’s usually always traffic noise in the background as I live next to a main road, this may well add ambience I don’t know, it probably just sounds a bit shoddy!

I know you have said about playing live before, is this something you would want to do on your own or with a band?

I’d quite like to work in a band. I’ve been playing basically on my own for such a long time now and I think in a way it’s pure laziness, as working in a band and being able to focus and play with other musicians is actually quite a skilled thing to do. I’d love to be playing more live gigs with a band though, it’s way more fun having people with you on stage to bounce off of.

What have you got coming up in the future? Do you plan to record more material?

I have a catalogue of songs in the pipeline, and I think an EP will be coming out in the next year with a lot more stuff.

Who should we be listening to?

Is there anyone you would like to work with?

One of my friends Jen Simmonds who I used to gig with about 8 years ago has approached me about working together again, she’s just released an EP called Through the Night, which is so chill. So I definitely am looking forward to playing together again as she’s crazy talented and a brilliant songwriter.

To find out more about Rosie’s music click here